Indigo was adopted as a part of the official emblems of the Tokyo Olympics and Paralympics. This section introduces the history and appeal of indigo, which is attracting a great deal of attention from Japan and abroad as “Japan Blue”.

Ai indigo is now strongly recognized as a raw material for indigo dyes and other dyes, but originally it was also valued in many parts of the world as a medicinal herb with many functions. Even in Japan, it is said that it was used not only as a raw material for dyeing, but also that it was applied to the skin, boiled and drunk, and eaten. There are numerous varieties of indigo. In Japan, the representative of indigo was initially the mountain indigo of the Euphorbiaceae family, but today, however, many growers cultivate the tade indigo, which was introduced from the Indian Ocean around the 6th century.
Tade indigo is an annual herb belonging to the family Tadeaceae and is cultivated in Tokushima Prefecture, Hokkaido, Aomori Prefecture, and several other regions. 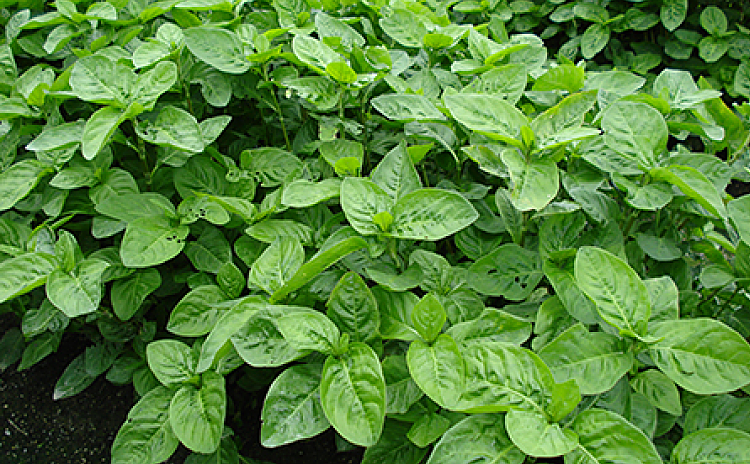 Ai indigo leaves grow at a rapid rate and are thinned and transplanted multiple times before harvest.

The History of Ai Indigo

The period dates back to a whopping 3000 BC. It is said that the record of the discovery of an aizome indigo dyed dyeing tank, which remains in the ruins of the Indus civilization, was the first time in the world that the existence of ai indigo was confirmed. As time went by, around 300 B.C., civilizations began to interact through the Silk Road, and aizome indigo dyed fabric products are believed to have been actively traded back and forth, and ai indigo was distributed throughout the world, especially in India and Egypt. Incidentally, the history of ai indigo in Japan is said to date back to the Nara Period. It is said to have been introduced from Tang China via the Korean peninsula, and many aizome indigo dyed cloths from that period are still preserved at Horyuji Temple and the Shosoin Repository. It is said that the Izumo tribe was the first to cultivate this ai indigo, which is called tade indigo. It is said that during the Warring States period, one of the colors of ai indigo, "kachi-iro," or "victory color," was associated with good fortune, and this led to increased demand for dyeing the undergarments of samurai warriors' yoroi with ai indigo. At the same time, the technique and process of dyeing using sukumo, a natural ai indigo dye made from tade indigo, which is still used today, was introduced, and the production of indigo dye (= sukumo) began in earnest. In the Edo period (1603-1867), aizome indigo dyeing came to be widely used with the spread of cotton. Among these, Tokushima's "sukumo" was treated exceptionally well as high-quality "Awa Ai," and by the middle of the Meiji period (1868-1912), it had swept the national market and reached its peak production. 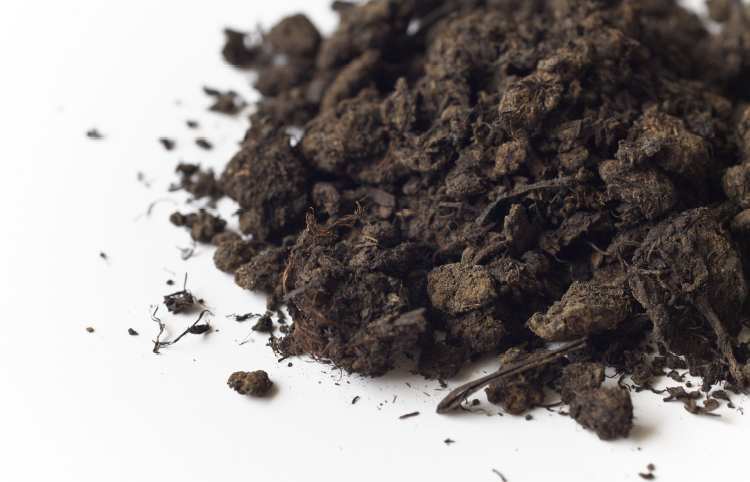 How Ai Indigo is Produced

Ai indigo cultivation begins in March. Choose a day of great peace to sow ai indigo seeds in the nursery and cover them with soil just enough to hide the seeds. A month later, the ai indigo seedlings germinate and are thinned out. After another month, the seedlings will have five to six true leaves. By this time, the seedlings have grown to about 20 cm and need to be transplanted. 4 or 5 plants are pulled out at a time and they are then transplanted in bunches 40 cm apart. As long as the weather is good, they will continue to grow, so it is important to weed them frequently. Around June, the ai indigo leaves grow even more, reaching a height of 50 cm to 60 cm. Once the plants have grown to this point, they are ready for harvest. 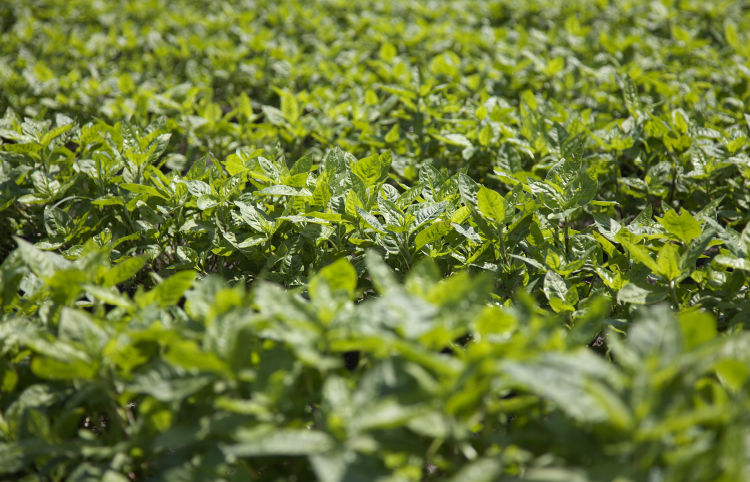 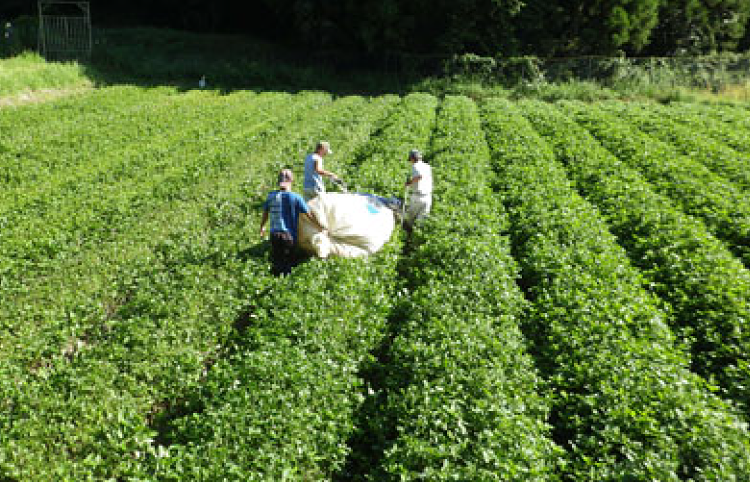 How Ai Indigo Becomes a Dye

The harvested leaves are immediately transferred from the field to the garden of the ai indigo master's house and placed in the cutting machine. The cut leaf ai indigo comes out of the cutter's vent and is blown away by the fan wind. Stems and leaves are sorted here because different weights fly different distances in the wind. The selected ai indigo leaves are thoroughly dried in the sun and preserved. This is called "aikonashi”. In September, the preserved leaf ai indigo is placed in a bed. Thereafter, only water is poured over the leaves to promote fermentation, and the process of "kirigae," or mixing with water every 5 to 7 days, is repeated, and when the weather turns cold, the indigo dye "sukumo" is ready to be used. 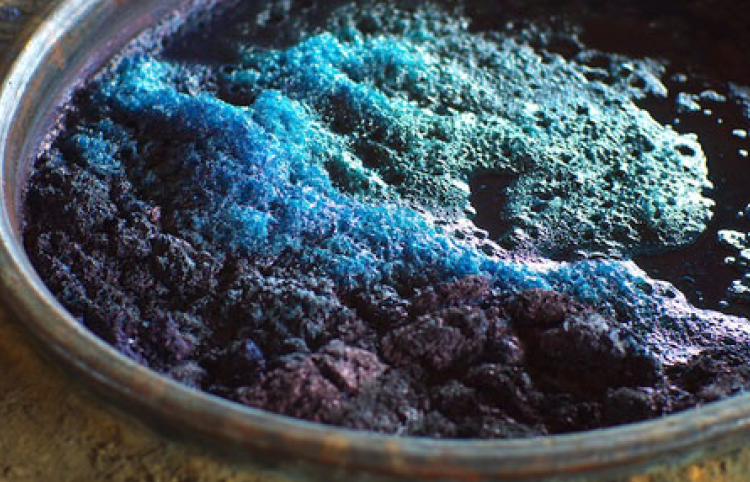 Ai indigo is a plant with many beneficial effects, and it has been highly valued as a medicinal herb since ancient times. The benefits are not only found in the plant indigo, but also in products that utilize ai indigo. Here are some of the lesser-known benefits of ai indigo. The numerous benefits of ai indigo are what make it so appealing.

Ai indigo is an herbal medicine. 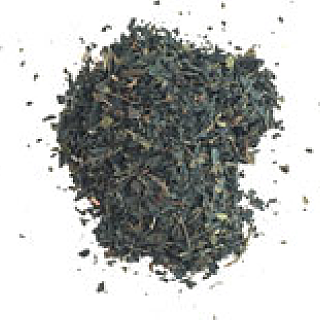 Even before dyeing cloth, dyes made from plants and trees were being pursued as medicines to treat illnesses. Ai indigo, in particular, is said to be effective for stomatitis, detoxification, vomiting, and antifebrile, and because of its many benefits, it also has an aspect as a Chinese medicine or herbal medicine. The effects and uses of this product are described in detail in ancient Chinese and Japanese pharmacopoeia books.

In addition to its efficacy as an herbal medicine, ai indigo has other benefits that have received renewed attention in recent years, which are the anti-inflammatory and antibacterial properties of ai indigo. Since the Edo period, underwear dyed with ai indigo has been said to be effective against cold and rough skin. Today, the range of products dyed with ai indigo is becoming wider and wider every year, from innerwear such as shirts to clothing such as socks and handkerchiefs, to interior decorations such as curtains and accent cloths. 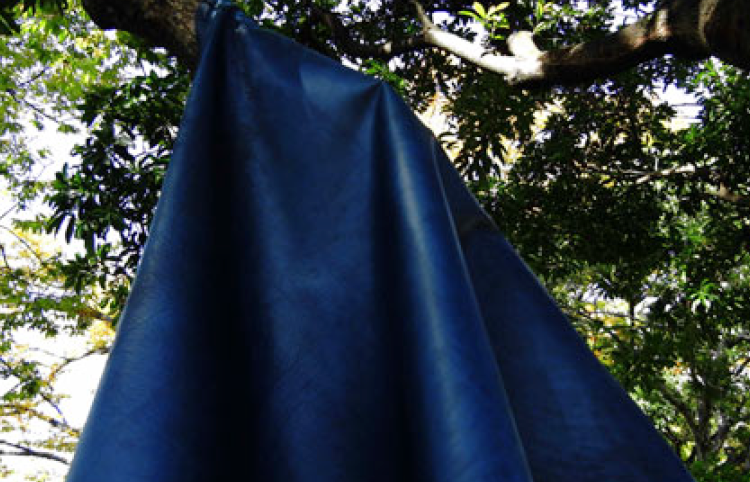 Now it is even used in health foods.

Ai indigo is said to be attractive as a food due to its abundance of nutrients, in addition to its various beneficial effects. Among them, the polyphenol content is said to be about four times that of blueberries. Furthermore, since it is rich in dietary fiber and minerals, "ai indigo green juice" and "ai indigo supplements" have been commercialized and are attracting attention as health foods. 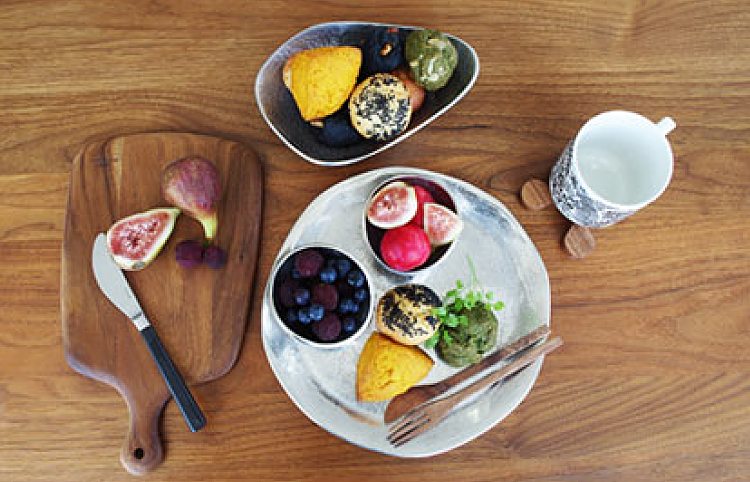 A Plate with Ai Indigo as an Ingredient

How to Use Ai Indigo

Speaking of ai indigo, the harvested leaves are used as raw materials for a variety of products, including aizome indigo dyeing. Aizome indigo dyeing is also increasingly being used in applications other than clothing, such as towels and shirts, and the commercialization of ai indigo is expected to continue to increase in the future.

Did you know that ai indigo is actually a plant that is high in nutrients and very popular as a food? Ai indigo is particularly high in polyphenols and dietary fiber, so much so that green juices and herbal teas made from powdered ai indigo leaves have actually been commercialized. In addition, supplements have been developed that include its efficacy as an herbal medicine. It is applied not only to beverages but also to health foods. 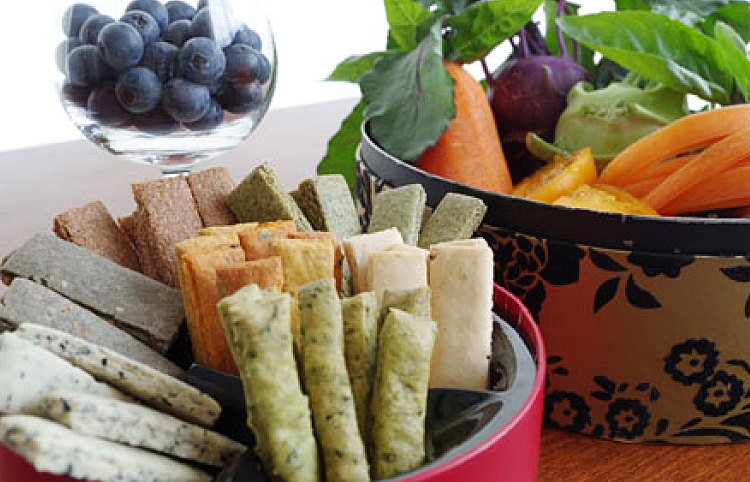 Cookies made with ai indigo powder. Roughly crushed, dried leaves are kneaded into the dough.

I don't think it is well known that ai indigo can be dyed on leather. The beauty of aizome indigo dyeing lies in the many expressions it produces with its brightness, subtle irregularity, and depth of color, and the same is true of leather products. The more you use it, the more it will change its expression and gain its taste. With such commonalities, ai indigo and leather products are sure to make the wearer look even more attractive. 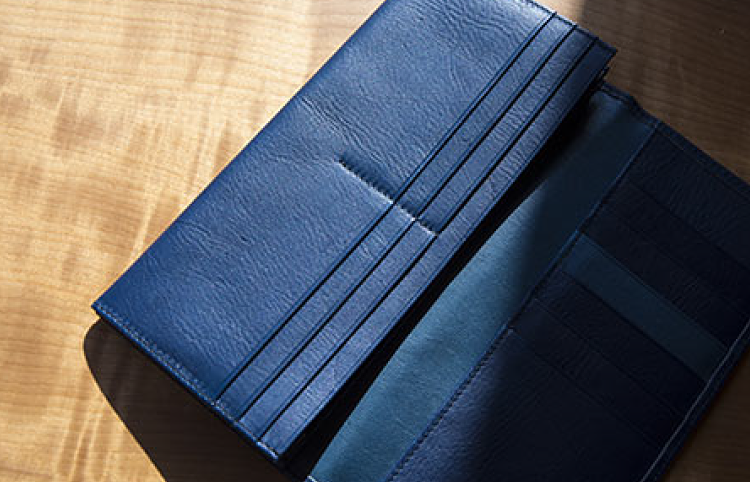 A leather wallet dyed with ai indigo. It changes its expression every time you use it.

Following clothing and food products, the use of ai indigo has also extended to living spaces. While there have been many works of lacquerware and ceramics decorated with patterns using ai indigo dye, ai indigo is now beginning to be appreciated as an interior decoration material, such as for flooring and accent cloths. The warm hues and modern Japanese feel that ai indigo imparts will attract more and more attention in the future. 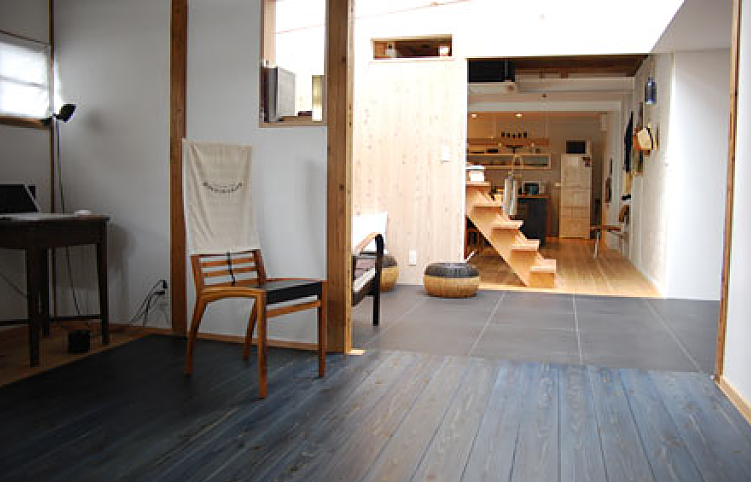 Flooring painted in color. Ai indigo is used as a paint.

Ai Indigo from a Global Perspective

Ai indigo in Japan is currently experiencing a quiet, nationwide boom as the beauty and texture of natural ai indigo is being reevaluated. Looking around the world, there are countries and regions where ai indigo is as highly valued as it is in Japan. These include Taiwan and France. Here we would like to introduce, albeit briefly, the ai indigo situation in Taiwan and France.

The Ai Indigo Situation in Taiwan

In recent years, Taiwan has begun to re-evaluate ai indigo, which had been considered lost from the 1920s to the 1940s. This overlaps with the situation of ai indigo in Japan, which has come back into the limelight after a period of decline since the 1890s. In particular, there is a thriving movement to carry on the culture of aizome indigo dyeing, and various efforts are being made to do so. 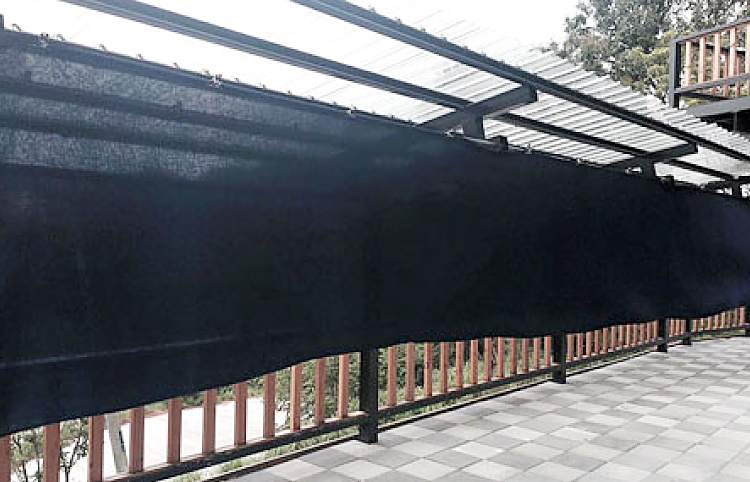 Scenery at Zhuo Ye Hut（卓也小屋）. As a leisure farm, it is helping to raise awareness about ai indigo.

One representative example is the work done at Zhuo Ye Hut（卓也小屋）, a farm in Sanyi Township. This is a leisure farm that includes an ai indigo plantation, an aizome indigo dyeing factory, a vegetable garden, and lodging facilities. Here, workshops for hands-on aizome indigo dyeing are offered. Visitors can experience aizome indigo dyeing at the facility, which is also visited by tourists, and is said to be contributing to the spread of ai indigo to tourists coming from home and abroad.

In addition to the inheritance and development of culture, Taiwan, like Japan, is also commercializing ai indigo in a wide range of genres, making it one of the countries to keep an eye on in the future.

The Ai Indigo Situation in France

In France, Toulouse, a nuclear city in the south of France, has attracted a great deal of attention in the ai indigo field. Toulouse is actually the city that made a huge fortune by distributing blue natural pigment (=pastels) all over Europe. This blue natural pigment is the Japanese equivalent of ai indigo. At that time, pastels were produced in France using wood. A closer look at the cityscape reveals window frames and doors glowing blue, a scene that seems to symbolize a pastel, prosperous city. 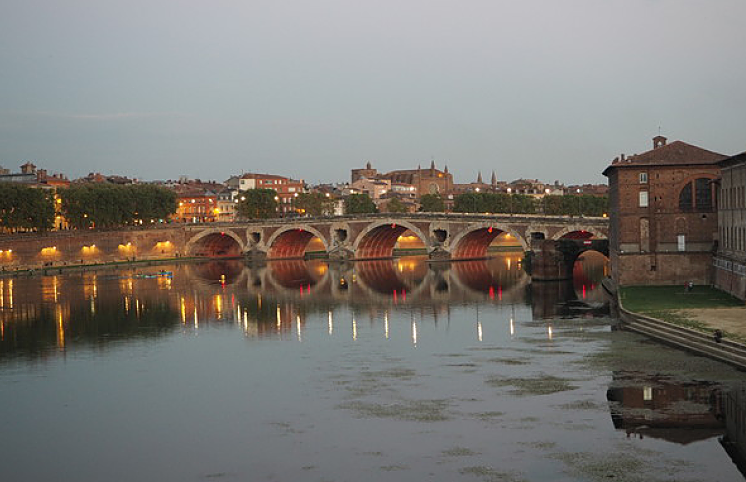 The Pont Neuf Bridge, had a great deal to do with the popularization of pastels at that time. It spans the Garonne River, which flows through the center of the city of Toulouse.

Of course, the blue glow is still alive and well today, and the Toulouse cosmetics brand Graine de Pastel offers a number of cosmetic goods and other lifestyle items that make use of pastels. Pastels, like ai indigo, are attracting attention for their anti-aging properties in addition to their function as an herbal medicine.

Thus, ai indigo is an item that is attracting renewed attention not only in Japan but also overseas.